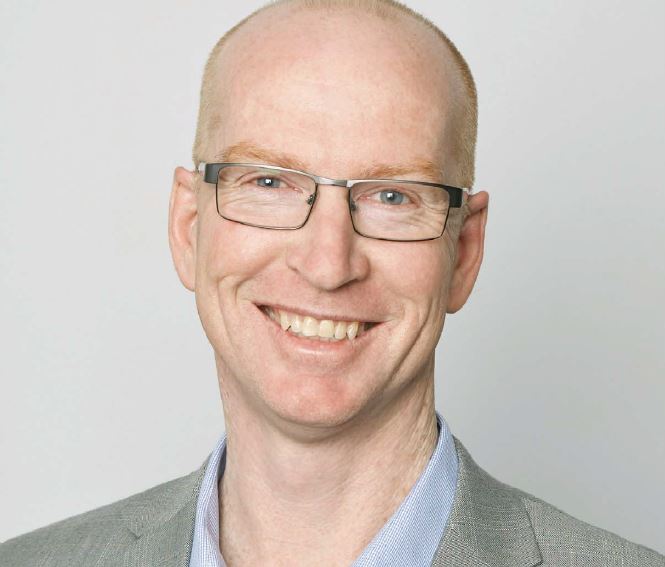 Rob Flux began his first journey as a property owner when he was just a teenager.

I bought my first home at the age of 18, with a very creative deal that involved buying the house that I grew up in from my parents, he says.

Around this time, I read a book by Jan Somers called Building Wealth Through Investment Property, which set me on an initial journey of buy-and-hold investments. I bought my first investment property at age 21, which helped me to own my PPOR outright at the age of 24.

It was an auspicious start to property ownership, and Rob was well on his way to financial prosperity. However, he learnt many lessons at the time, including some hard-won truths about property investing and tax.

“I sold my very first investment property for a tidy profit inside 18 months of owning it, and I only then learnt what capital gains tax was after the fact. That hurt!” Rob says. “I was uneducated in the early days as to my strategy, including where to buy and why, and I was really just hoping that the market would go up. Luckily for me it did.”

Despite this initially unstructured approach, Rob had some excellent early success and was set for an early retirement – until his divorce left him licking his wounds and having to start over.

“After losing my wealth at age 38, I lost my way for a while. Then after reading another book, Rich Dad Poor Dad by Robert Kiyosaki, I decided that I didn’t want to wait another 20 years to build my wealth again through passive buy-andhold [investments], with no control over the market or the outcome.”

This is when Rob decided to use a whole new strategy to get ahead in the property game, and although his first experiences were no longer part of this strategy, they gave him the foundation to overcome obstacles moving on, allowing him to reach a position of success and prosperity today.

“In starting again I wanted to accelerate my success and set out on a journey of educating myself, including getting mentors and coaches along the way. I have had several of each to date, lifting my game each time. Education is the key to my success; the more I learn, the more I realise there is more to learn. It is the insurance policy to avoid mistakes before they happen. Ignorance is very costly!” he says.

“Once I saw that my mentors had mentors themselves, the light bulb came on that I needed to associate myself with people playing a much bigger game than me if I wanted to grow quickly. One of my current mentors does 800-lot land subdivisions, and another builds 15-storey buildings.” 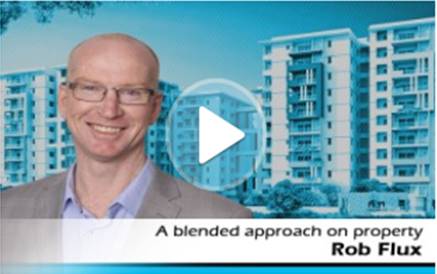 Video with thanks to our production partners: Real Estate Talk

Throughout Rob’s 20s and 30s, he built his property portfolio the traditional way, investing in buy and hold assets that he planned to pay off so he could eventually live off the rental income.

After his marriage breakdown he had to start again, and the prospect of rebuilding his wealth over another 20-year period didn’t appeal.

“I set about building on what I already knew and learning how to do property development so that I could force value onto the property in any market,” he says.

“I now have a blended approach, which allows me stability of cash flow, security for my lending, and also leverage, with my cash working hard for me.”

His first creative deal was a student accommodation deal in Kelvin Grove, a suburb of Brisbane that is home to the Queensland University of Technology. He paid $700,000 each for two adjacent homes in 2008; today they are worth around $1.25m each, generating approximately $175,000 per annum in combined rental income.

“The real kicker here was that I actually bought the sites for their development potential, as I hadn’t heard of student accommodation previously. After doing the development, I kept the two initial houses for their cash flow, plus I kept one of the ultimate end-product properties and some cash as the profit.”

It was to become the first of many deals that have allowed Rob to amass a profitable property portfolio.

“I have 29 rooms in student accommodation properties, which are my long-term-hold staples, for their cash flow,” he says. “I do a range of small- to medium-scale developments with my own cash to pay down the debt quickly on my staple properties and to improve their cash flow position.

I also do joint ventures with other investors, with me running the deal and them funding it, as I have the time and skills to do more when my money is already accounted for in other deals. I’ve done four JVs in the last year alone!”

Rob’s largest deal to date was an eight-townhouse project that had a gross realised value of $5.2m on completion, and a profi t of $1m.

“My sweetest deal was a very basic splitter block, which earnt me $190,000 in only six weeks,” he says.
“I wish they were all that easy!” 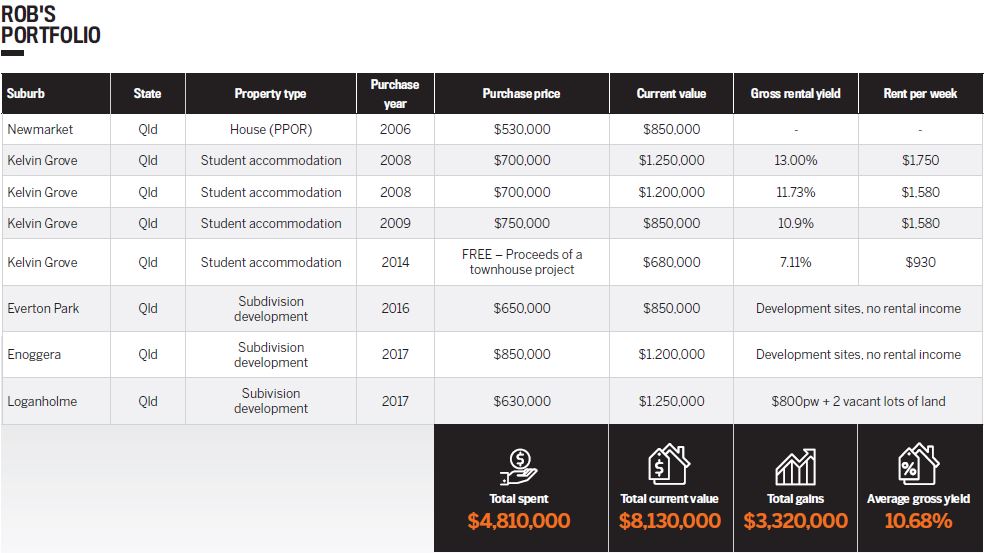 Looking back to look forward

Rob’s second foray into property investing has clearly served him well, as he’s been able to achieve enough wealth to retire from the workforce altogether. “I am already retired and enjoy life doing property developments full-time,” he says.

Though Rob has enjoyed great success in his portfolio to date, he admits that if he were able to go back in time and do things differently, he would have adopted his development strategy far sooner.

“I would avoid the buy-andhold phase of my investing life and go straight into property development,” he says.

“Buy and hold, for me, is now where I park my money for residual income, and is not the means to create wealth itself.

I have four properties that are my staple long-term-hold cash flow properties, plus I’m now keeping select properties as profit from my development deals, and of course my PPOR. Being a property developer I typically have multiple projects on the go at a time. I think at present I have another three houses and four vacant blocks of land on my books, which is actually a bit low at present.”

While Rob’s property journey has enabled him to build his fi nancial retirement fund, it has also allowed him to give back to the investing community by coaching and mentoring other investors towards making their own profitable decisions.

“I’ve been running a networking group, Property Developer Network, since 2012, teaching mums and dads how to do this for themselves,” Rob says.

“I’m pleased to say that several people in my group are now also full-time developers, with many more on the way. I want to ramp that up as much as I can to help others get out of the rat race.” 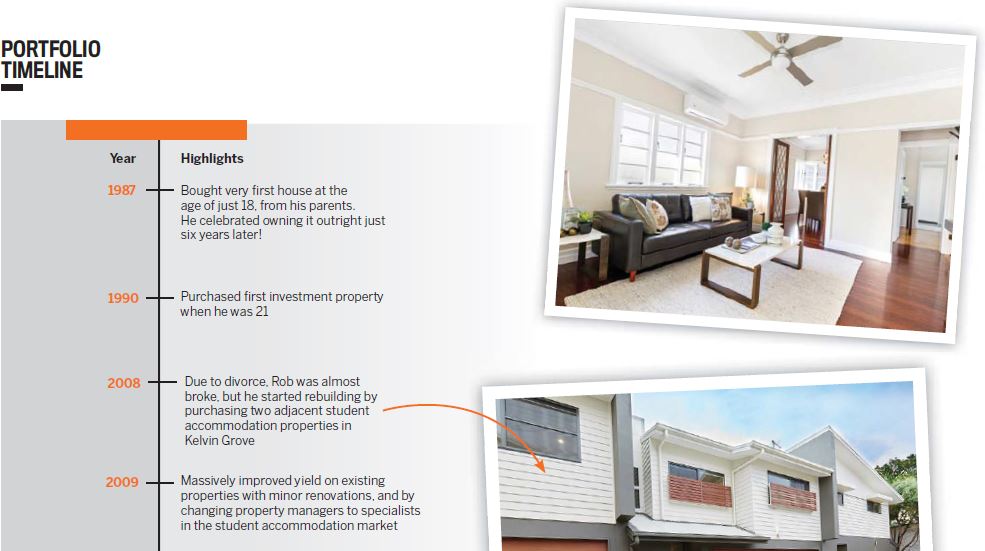 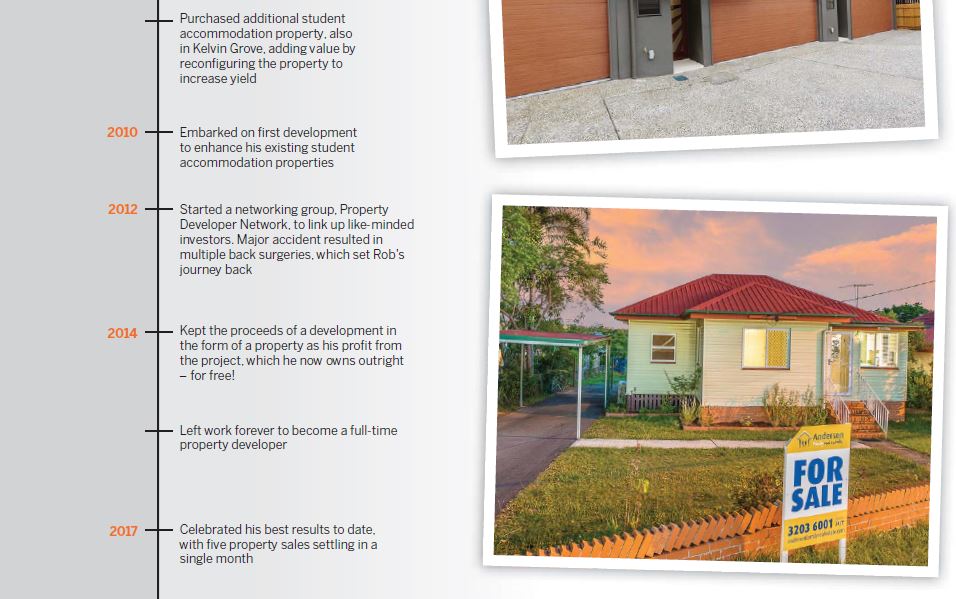 1. To be profitable, the sale price of the finished product should determine the purchase price going in – not the other way around.

2. Too many people are unclear on their idea of ‘success’. Understand your life goals before you determine your property developing goals.

3. Property developing is a team sport: educate yourself, learn from the path others have walked before you, and don’t be afraid to ask for help.

4. Find a mentor to help you solve your challenges and kick your behind when apathy strikes. Any investment in mentoring will pay off tenfold. 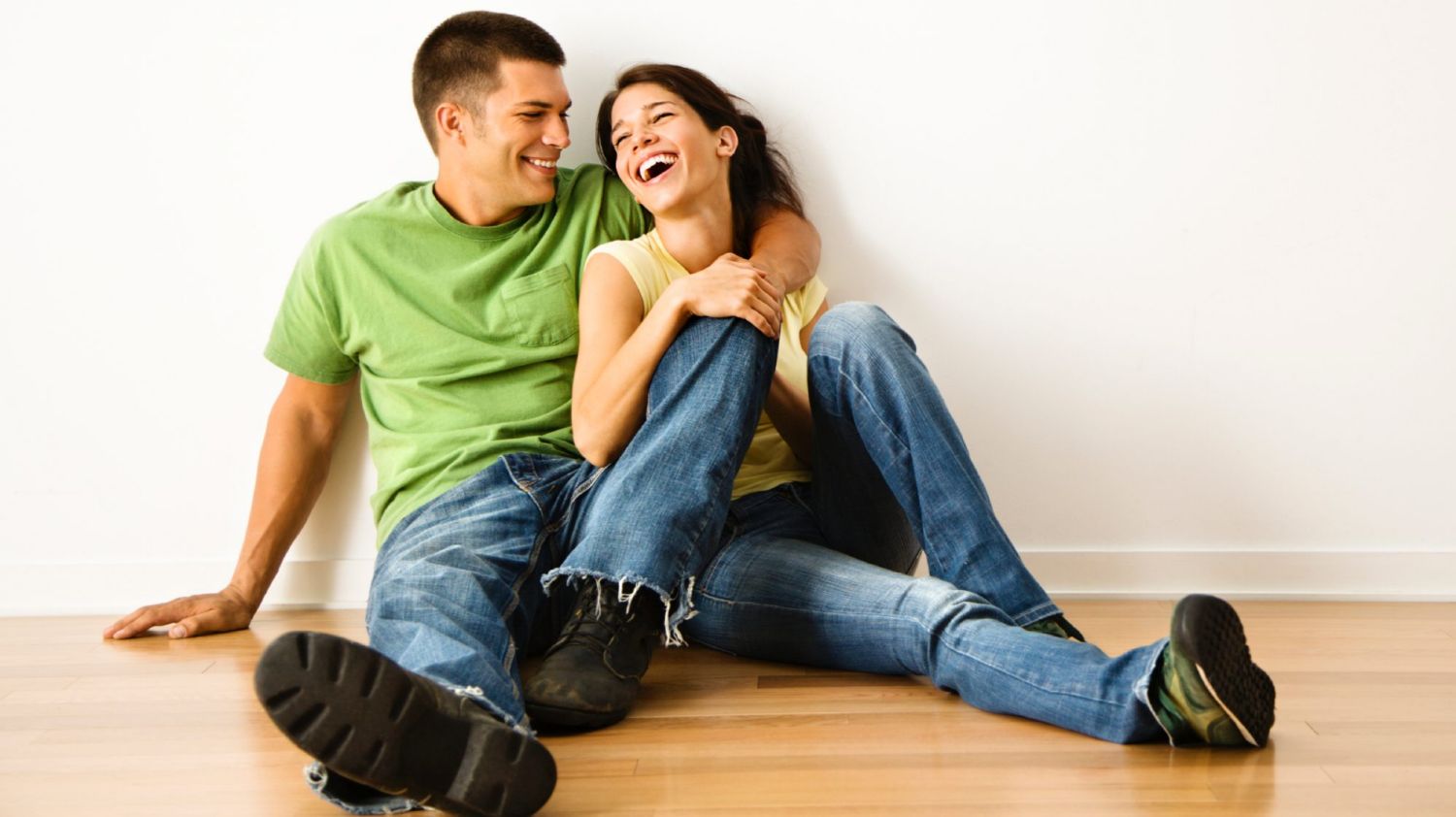 The waiting game: Why it pays to rent cheap while you save up to buy 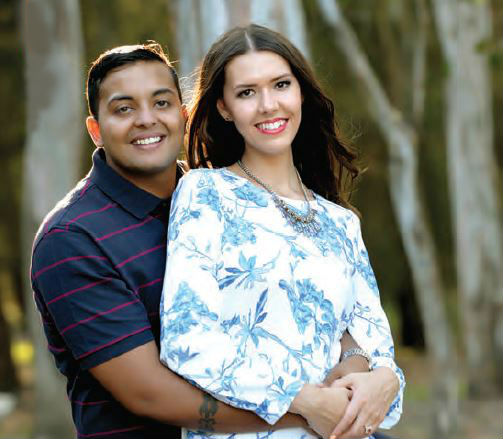